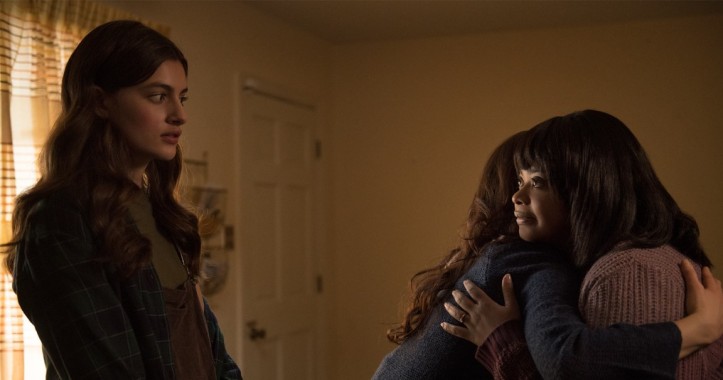 Ma is the new film by director Tate Taylor. His most successful film to date is his 2011 adaptation of The Help, a novel by Kathryn Stockett, an old childhood friend of his. Since then, his movies have seemed to flounder in quality, despite having people like Emily Blunt and Allison Janney and Octavia Spencer in prominent roles. He has mainly explored the suspense/horror genre since The Help, and Ma is proof that he should stay away from the suspense genre entirely, or at least find a more exciting way to do it.

Ma follows Maggie (Diana Silvers) and her mother Erica (Juliette Lewis) after moving back to her hometown post-divorce. After making friends with some questionable youths outside of the school who force Maggie to ask strangers outside of a liquor store to buy them booze, we enter Sue Ann (Spencer), a woman with a past and motivations that the kids couldn’t possibly know about. She lends them her basement as a space to drink and hang out but warns them not to go upstairs.

The biggest problem with Ma is the trailer. If you’re like me and you go to a lot of movies, it becomes increasingly difficult to avoid movie trailers even though the best experience in the world is going into a very good movie completely cold and without pretense. I probably would have enjoyed Ma a lot more had I not known what was about to happen at every turn. It falls victim to the recent trend of showing the entire film in the trailer, and not leaving any surprises of value for the final film itself. Another recent movie that did this is Isabelle Huppert’s Greta, a similar prestige-actress-wasting-her-time thriller that I may have enjoyed a lot more had I simply not seen the trailer. The point is these marketing departments need to get it together before audiences start avoiding these movies entirely.

Octavia Spencer is, like I said, a prestige actress who is wasting her time in a movie like Ma. However, she is clearly having a lot of fun in proving that she deserves more work like this. She’s always very good, and she’s excellent here. If only the rest of the movie had risen to her standards. She seems to know how absurd this premise is, and you can tell she wants to create a story that takes this material to its lurid potential, but she is never allowed to dial the crazy up to the level it needs.

We have plenty of Tate Taylor’s friends and many supporting stars popping up here. Juliette Lewis, playing the lead character’s mother, is fine and has the most to do out of the supporting cast. Luke Evans, previously seen in Taylor’s horrendous The Girl on the Train adaptation, plays an old friend of Sue Ann’s. And we also have Allison Janney, who has the most thankless role (and the worst wig) you could possibly imagine. She plays the manager of the veterinarian’s office where Sue Ann works, who is just yelling at her to get back to work. That’s the whole character. That’s what Taylor gives Academy Award winner Allison Janney, who surely has better things to do. I’m sure she did this as a favor, and he must be a very good friend.

Overall, Ma is a fine enough movie to watch when it’s on cable for free, but it’s nowhere near good enough to recommend going to watch at the theater during an already full summer movie season. Octavia Spencer is having fun, but the movie isn’t as biting as it needs to be. Produced by Blumhouse, this would theoretically fall under the horror umbrella, but it doesn’t feel like a horror movie at all. If anything, it’s a relatively campy suspense drama that isn’t aware enough of its own campiness to capitalize on that and roll with it. If Paul Feig had made this film, it would have been fantastic. Taylor still needs to find his voice as a director and writer.